ANALYSE THE LOCOMOTION OF THE RACEHORSE

The performance of racehorses is based on three essential factors: speed, fitness and locomotion.

The aim of this guide is to provide you with the key elements for a good understanding and analysis of racehorse locomotion. With the advent of data, it is now possible to obtain and analyse a wide range of data on horse locomotion such as speed, pace, stride length and stride frequency. Those data are key informations when it comes to enter a horse in a race or establishing a winning race strategy.

LOCOMOTOR SPECIFICITIES OF THE RACEHORSE

THE ENGAGEMENT ACCORDING TO THE LOCOMOTOR PARAMETERS

IMPACT OF THE RACING ENVIRONMENT ON LOCOMOTION

How to analyse the locomotor profile of a racehorse?

In order to analyse and determine the locomotor profile of a racehorse, it is necessary to focus on the stride length and pace of the horse’s strides.

A horse’s stride frequency is the second essential indicator for understanding the locomotor profile. This corresponds to the number of strides the horse makes in one second and varies according to speed.

These two data vary most of the time to the detriment of each other.  It is noticeable that when a horse extends his strides, it is immediately more complicated for it to maintain a high stride frequency. Similarly, when a horse speeds up his stride, it immediately becomes more difficult for him to maintain long strides. Furthermore, the pace is in most cases correlated with the horse’s endurance: a high pace is difficult to sustain over a long period of time and will therefore hinder high endurance. 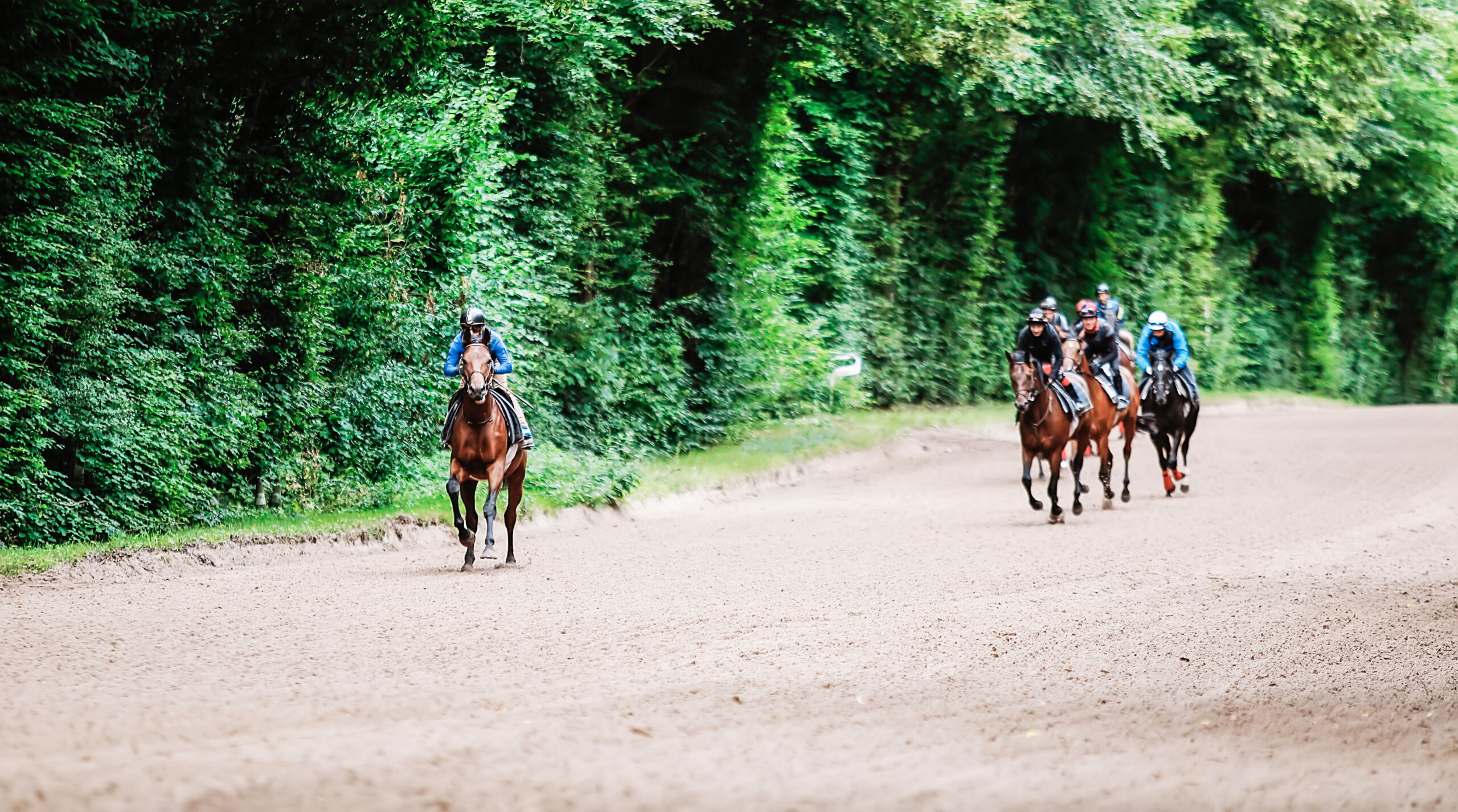 The various types of locomotive profile

Although all horses are different and each has his own style of gait, two typical profiles of racehorses can be distinguished:

Sprinters: Sprinters are horses that develop their best over short distances. In order to reach high speeds quickly, so-called “sprinters” will develop a very sustained stride frequency (more than 2.45 strides per second). However, this very high stride frequency is not sustainable for the horse over a long distance.

Milers & stayers: These are horses that run over longer distances. In general, milers run for distances of 1600m and more while stayers run for 2400m and more. These longer-distance races require a very high level of endurance which is characterized by great stride length and a fairly low stride frequency.

2. LOCOMOTION SPECIFICITIES OF THE RACEHORSE

Among racehorses, two paces are particularly distinguished: trot and canter. These are said to be “jumping” gaits: for a brief moment, the horse’s limbs are no longer in contact with the ground. Whether trotting or galloping, racehorses must use their energy to propel themselves forward. However, the locomotion characteristics of trotters and gallopers are not the same. 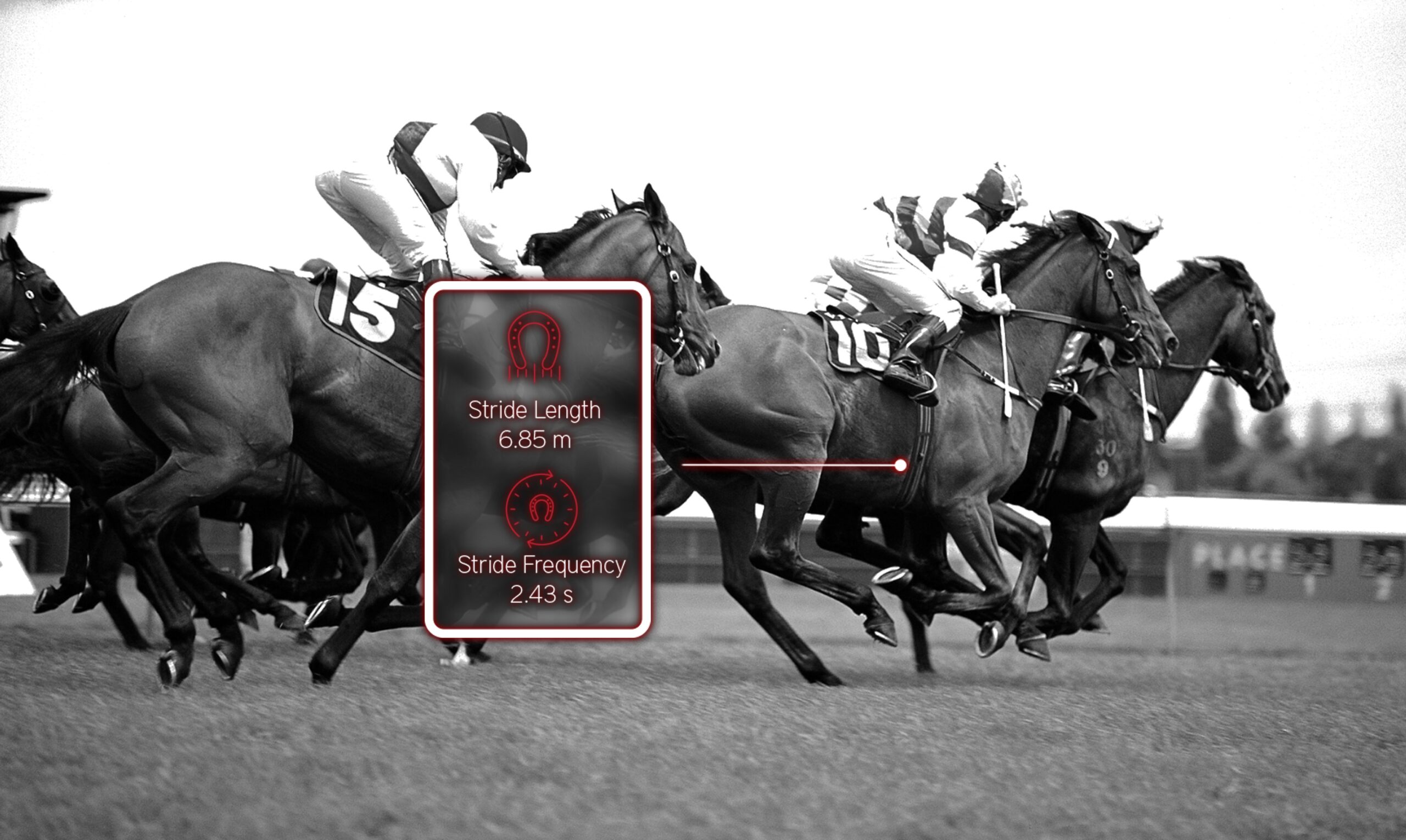 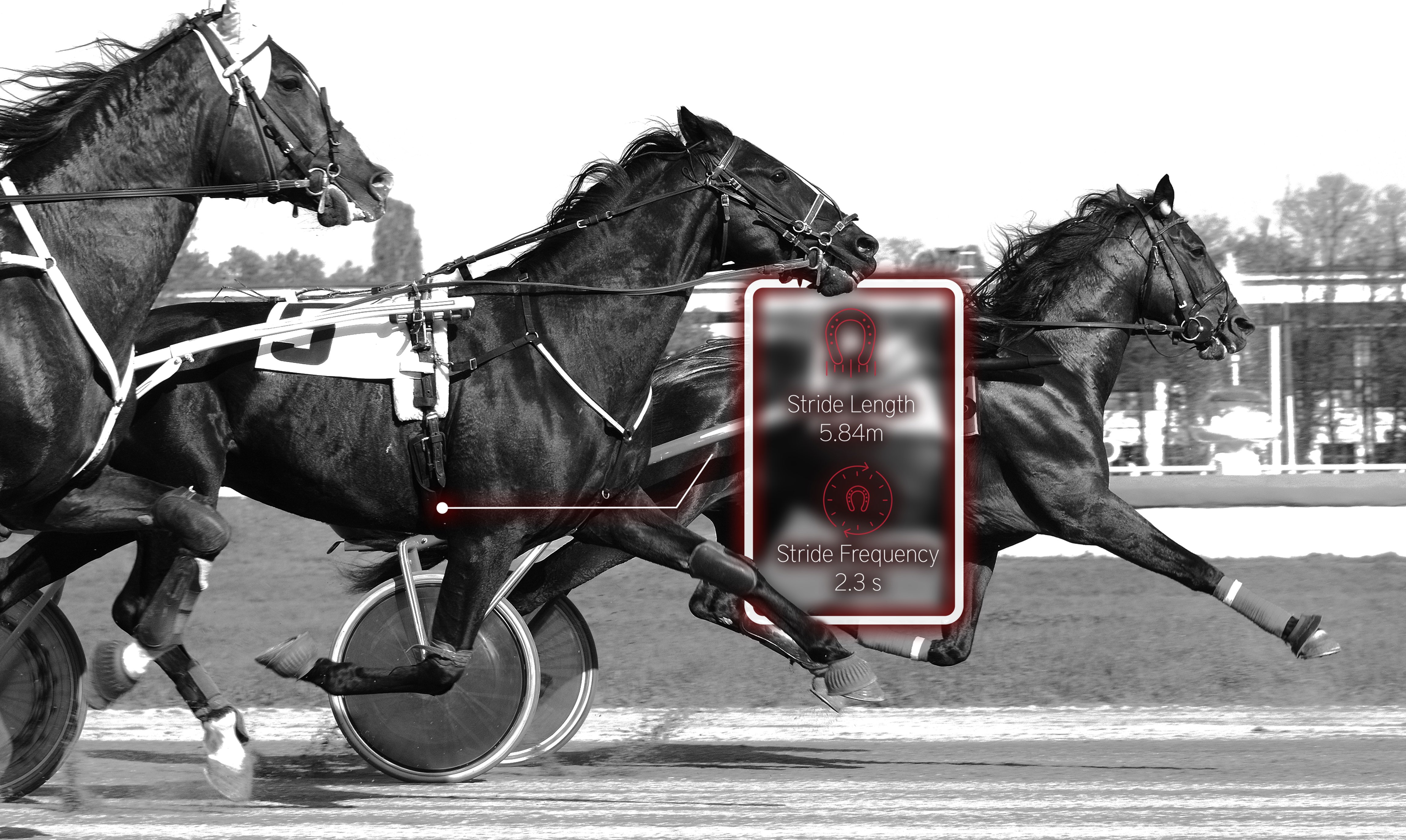 In harness trotting or mounted trotting races, the “trotters” adopt a symmetrical gait. Each limb performs the same movement, both in terms of distance covered and the time taken to cover that distance. The average of trotters monitored by EQUIMETRE shows a stride frequency of 2.3 strides per second with a stride length of 5.94m.

Unlike the trot, the gallop is an asymmetrical gait. Depending on whether the horse is galloping on the right or left side, the order in which its limbs are placed varies. On average, the data collected by EQUIMETRE show an average stride frequency of 2.43 strides per second and a stride length of 6.85m per stride.

In the same way, the breathing rhythm of racehorses varies according to the pace they adopt and the speed they deploy.

Conversely, at a gallop the breathing is adjusted to the horse’s stride rhythm.  The horse breathes in while suspended and breathes out when his limbs are laid down.

This coordination between the two is mechanically carried out and does not vary according to the speed or the tiredness of the horse. Therefore, when a horse needs to increase his heart rate, the horse is forced to increase its pace.

3. THE ENGAGEMENT ACCORDING TO THE LOCOMOTOR PARAMETERS

Depending on the locomotor profile of each horse, the entry distance and the race strategy differ. For a horse with a large stride length, it may be appropriate to start the sprint from a distance in order to allow the horse to reach his maximum speed by giving it time to increase the size of his strides to their maximum.

However, if the horse’s pace is very high, it is preferable to wait until the last moment, as the maximum speed will be reached quickly and a sprint starting from a distance may exhaust the horse, which will then no longer be able to maintain his pace in the last few metres. Therefore, a high stride length is not “better” than a high pace, it is rather a question of making the best use of each horse’s strong points.

Apart from the theoretical parameters that can be a large stride length or a high stride frequency, scientists have managed to bring to light common points for horses with optimal stride efficiency. The best performers are horses that, between each stride, spend very little time in contact with the ground and succeed in covering a large distance during the flight phase. 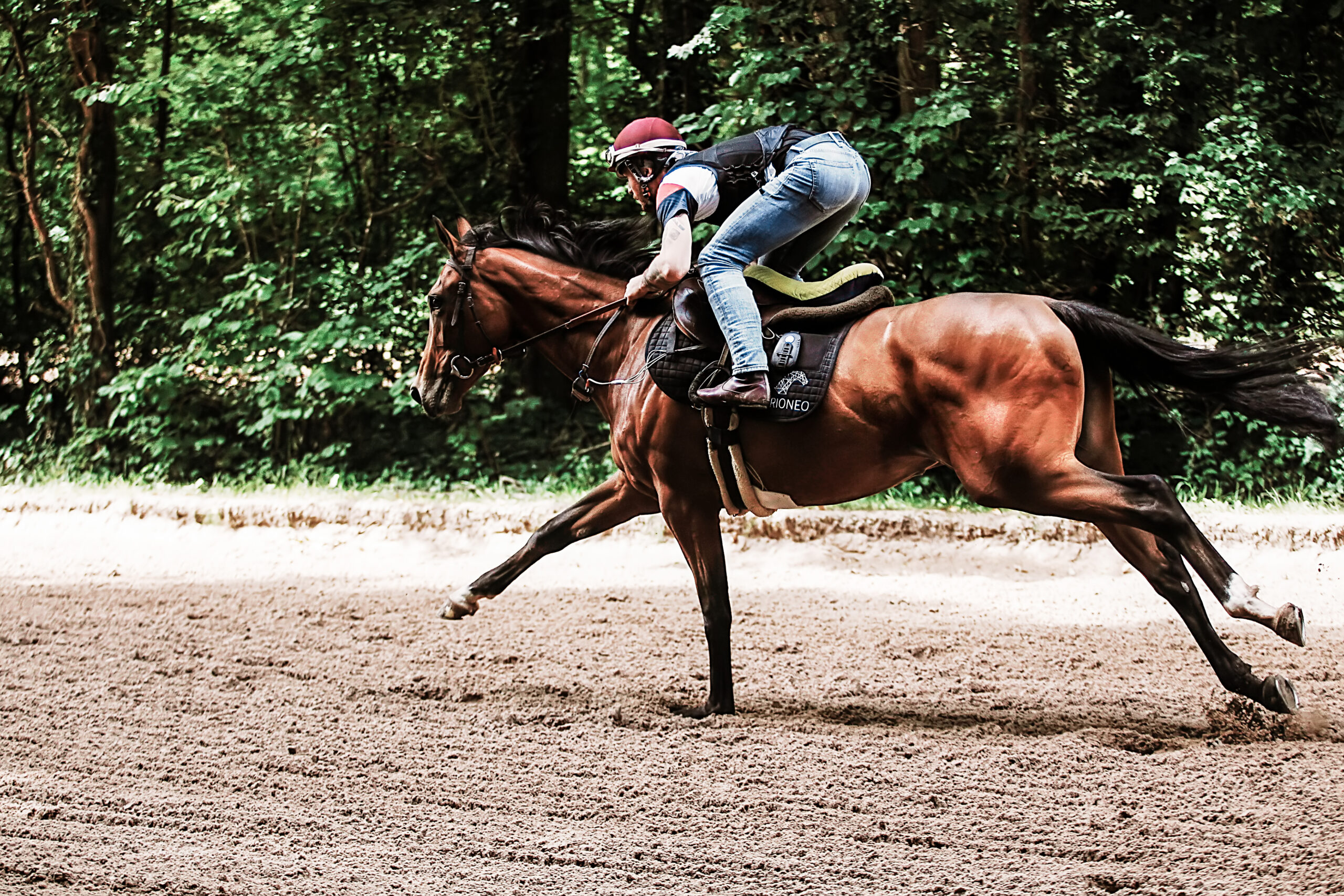 4. Impact of the racing environment on locomotion

The horse’s locomotion is strongly influenced by the terrain over which he is racing. The quality of the terrain as well as the type of track are determining factors in the speed strategy during a race.

The impact of turns :

In turns, the effort required from the horses is greater than in a straight line. In order to stay on the inside of the bend so as not to lose time and to compensate for the centrifugal force of the pull towards the outside of the bend, the horses have to make a more intense effort. 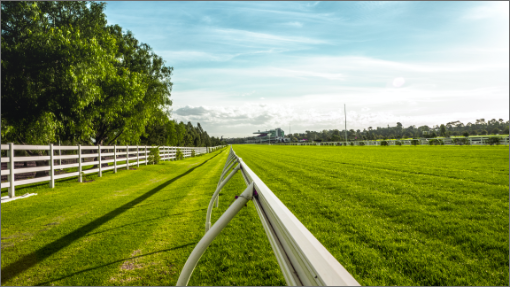 The impact of slopes :

On ascending slopes, the effort required of the horse is much greater. Indeed, the stride length decreases sharply due to the additional force required to cover the same distance as on the flat. If the horse expends the same amount of energy, its stride frequency will be less on uphill than on the flat. The pace also decreases.

Conversely, on downhill slopes, the horse’s balance must be maintained and during the race he puts a lot of weight on the front of its body.

The impact of the terrain :

The grass tracks on which racehorses run most of the time are very dependent on the weather. Temperature as well as rainfall affect the quality of the terrain.

Synthetic tracks are relatively independent of the weather, although slight variations do exist. On the other hand, their quality is far from equal to that of natural tracks.

Unlike the stride frequency, the stride length does not change linearly. Its evolution is more important at low speed than at high speed. Thus, at full speed the variation of the rate will produce greater acceleration.

During the races, the horses constantly adapt their locomotion to adapt to the many changes in pace due to the terrain, the racing train or the jockey’s will. The horse adapts by first modulating his pace, then its strides to reach the pace-stride length pair for which he is most comfortable at that speed.

If you wish to implement connected solutions to collect cardio, speed and locomotion data, don’t hesitate to call on one of our experts! 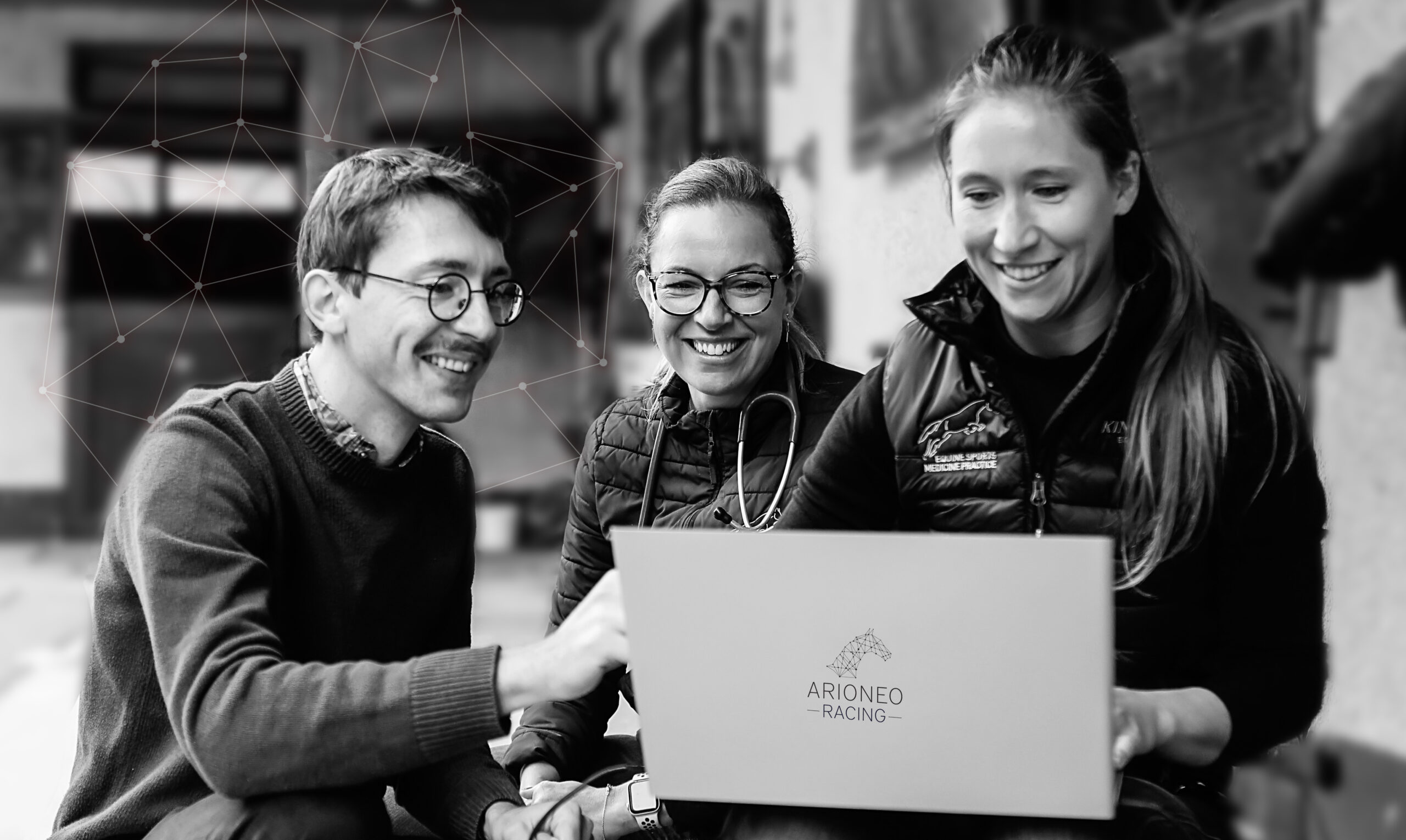