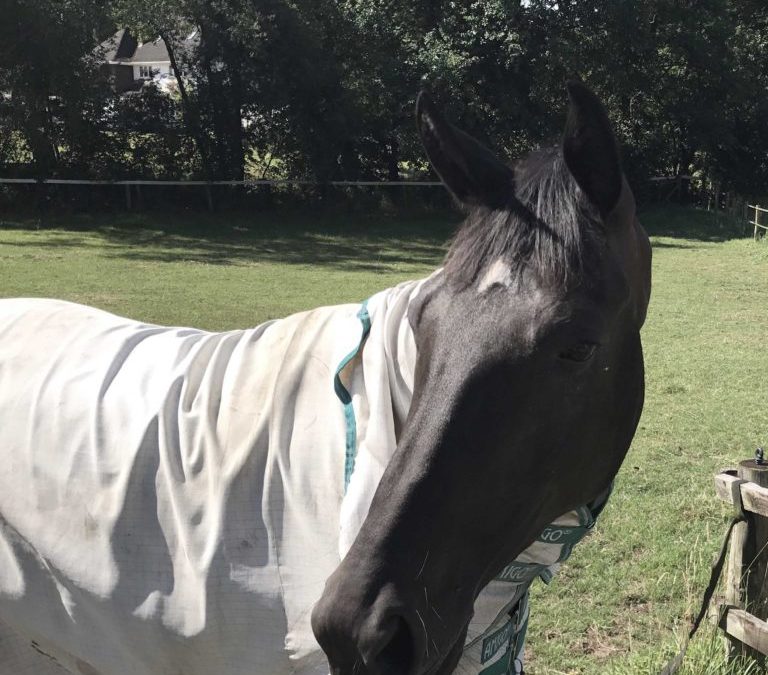 Driving through the middle of the New Forest, in the South West of England on a sunny summer Monday morning allows you to catch sight of small herds of New Forest ponies idly wandering over the hills.  Then in a second you are back to civilisation and I needed to make sure that I didn’t miss my turn! I was off to meet Nicola Buchanan at her yard near Ringwood on the Hampshire/Dorset border to talk about her career and her use of Orscana.

Turning off the main road into her drive, I was struck with the peace and quiet that suddenly enveloped me. No noise of the road just birds singing and a gentle breeze wafting up the drive. There was Nicola, as always smiling, welcoming me to her lovely yard.

Taking a stroll to her arena again I was struck by the tranquillity. What an arena, I was amazed by the huge wall of mirrors at the far end, she laughingly told me that they were her lifesavers and had helped her no end. I was really struck by the feel of the arena, it was very springy and did not seem to move when walking over it. “It’s from Harvey’s (Nicola’s husband) company equestrian X, he came up with the formula, it’s called xRide” she told me. The surface hadn’t been rolled in over 3 weeks and it basically looked completely flat! I have to admit to feeling rather jealous.
Wandering back past the fields, she explained “These are the horses summer fields. These fields get very boggy in the winter” and then pointed to another 3 fields that were resting, “those are my winter turnouts paddocks.”

It is obvious how much her horses love her. Paddy (Half Moon Dark Magic) the second he saw her immediately came to the fence to enquire if there were any polos on offer and if there was a pat and a scratch available for him. Of course, there was! And a few kisses too.
Not to be left out Taylor (St Giles Fairytale) her 6-year-old was making a beeline for the gate. There seemed to be a bit of a swing in her step. I think she knew she had made her Mum proud the previous day winning both her classes at Cholderton with 73.4% in Medium 61 and 71.8% in Medium 76.

As we made our way back to the stables, 5 year old Cosmo (Cosmpolitan St Giles) lazily looked towards the gate. He was under his favourite tree by his prized rolling patch. He had also had a good Sunday competition being a little naughty in his Novice test, then in his Elementary knuckling down and winning his second class with a fabulous 75%.  As soon as Nicola went into the paddock he was by her side following her. Nicola laughed “He’s is a cheeky chap, I think he sometimes is too smart for his own good, you should see what he does with his tongue!” Once at the gate Cosmo happily obliged his audience sticking his tongue out, left and right and then making sure he was close enough for Nicola to play with it.

Strolling through the yard, we were suddenly in a lovely country garden. Sitting in the shade under a beautiful apple tree in the garden with a fabulous cup of coffee, Nicola kindly answered my questions. 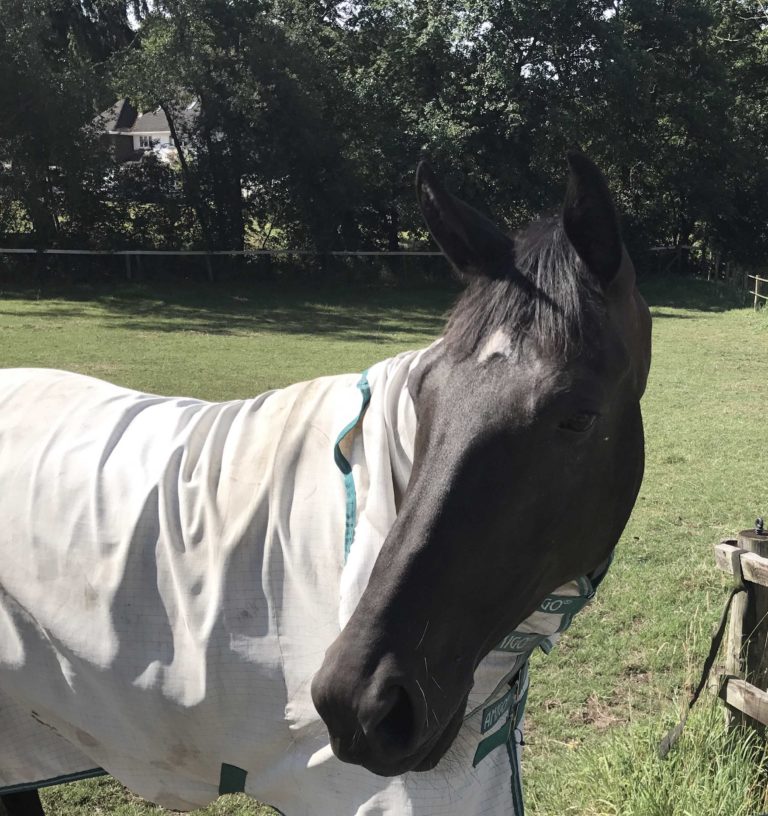 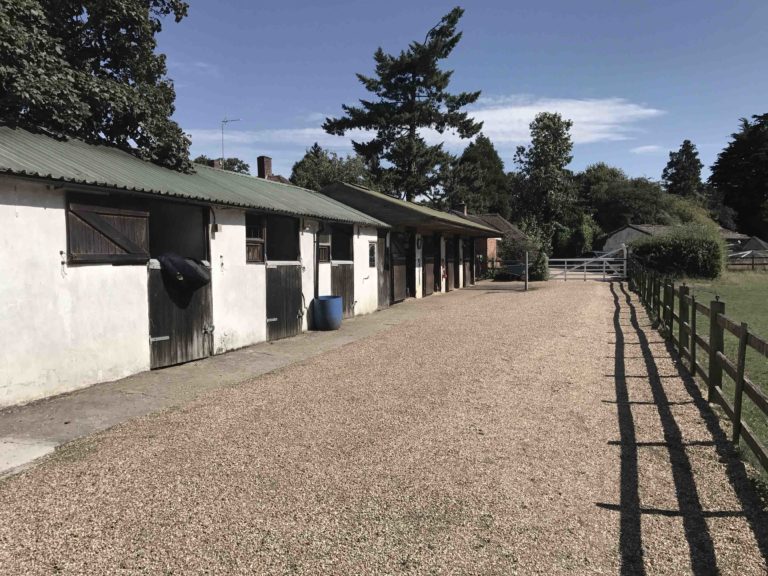 NICOLA’S INTERVIEW ON HER CAREER AND HER USE OF ORSCANA

WHAT HAS BEEN YOUR GREATEST ACHIEVEMENT IN YOUR CAREER SO FAR:

There are 2 greatest achievement so far! One was being part of the team in Saumur 2007 on St SwithEn’s and achieving my Great Britain badge. The other, winning the CDI at Hickstead in 2008 on Sancerre. It was Sancerre’s first season in Grand Prix, he was really up and coming. It was just lovely, a really great start to the year with a CDI win.

WHAT IS YOUR ULTIMATE AMBITION(S):

Is to be a part of a team representing my country for the nation but I would also like to be part of a good GrandPrix circuit on my horses. Doing the indoor competitions internationally, participating in good CDI’s abroad in the summer and if I make it to the Olympics at some stage that would be great but it is not my end goal. It is more to be a respected rider, to keep learning and to enjoy the sport.

WHO WAS THE HORSE THAT TAUGHT YOU THE MOST AND WHY:

Do you know, I can’t exactly say which horse because I think with every one I ride I learn a little bit. It doesn’t matter how many years go by with every horse, because they are all so different in athleticism and ability, you catch on to a feel but every feel is different as each horse is an individual. I’d say in terms of riding at Grand Prix level, I would have to attribute St SwithEn’s and Sancerre with what they taught me, they were the first two to do it well. It’s so hard to narrow it down to a horse, as I am still learning and will continue to learn even now!

WHAT HAS BEEN YOUR BEST EXPERIENCE COMPETING:

I have already mentioned Saumur and Hickstead but the other experience was riding at Olympia in 2006. That was a really, really lovely challenge. It’s so atmospheric and such a lovely place to ride. It was a Grand Prix World Cup qualifier, it was just great to be a part of something so special.

WHAT HAS BEEN YOUR WORST EXPERIENCE COMPETING:

It was an International at Fry’s in Yorkshire. It took us 7 hours to get there and I think I was eliminated within 30 seconds of saluting! My horse started caprioling, I remember it was really windy and all the tents were flapping, he just couldn’t cope with the situation and that was that, it was time to go home. I think it cost me £500 for 30 seconds by the time I had paid the entry fee and travelled up there. But there have been a few other notable ones going wrong, getting eliminated ….

WHY DO YOU USE ORSCANA?

I believe in learning and that includes embracing new innovation. Orscana is a technology that helps me learn more about my horses and the more that I understand them, the better our partnership becomes. It would be impossible for me to monitor their movement or their temperature accurately without it.

HOW DO YOU USE ORSCANA?

I use Orscana to monitor their wellbeing, to see how hot they are which has been a very big eye opener for me. So, I don’t over rug anymore.  I am also able to check what they are doing during the night. Let’s say they have rested a huge amount one evening, I will then make my work a bit lighter the next day because it does tend to correspond to the amount of work they have done as to how much they lie down during the night.

HAS ORSCANA INFLUENCED ANY CHANGES IN YOUR ROUTINES?

Not over rugging! I am very good now, not thinking because I am cold the horses are cold. I was completely over rugging. I have seen a change in Paddy’s focus and attention since he has not been too hot. We all do it, absolutely we do, we go on our own temperature. I don’t think people completely understand that the horse has a completely different thermoregulation system. It would be a great article in Horse & Hound, showing people the differences between humans and horses.

A big thank you to Nicola for taking time out of her busy training and teaching schedule to share her experiences, yard and wonderful horses.

It was time for me to take my leave and let Nicola get ready for her next pupil whose arrival was imminent.